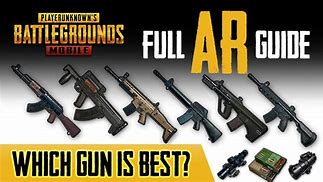 M416 is the best gun in the pubg mobile for close range, mid-range, and long range.

With the full attachment this guns completely becomes a beast. Players usually use this weapons with the scope of 3x. The less recoil of this gun makes it even easy to use.

Akm is a beast when it comes to close range. Players usually use this weapon with iron sight or red dot scope. The higher recoil of this gun makes it difficult to fire in mid and long range but in close range akm is the king of all.

M762 a close and mid-range weapon with the ammo of 7.62 which makes it a beast in the close range. The firing rate of this gun is a beast. Compare to akm if this gun is nicely used it can even take down akm.

SCARL the alternative of M416 is a close, mid and a long range weapon people usually don’t prefer this gun and go for m416 because recoil of M416 is a bit of easy to control rather than SCARL.

DP-28 a weapon of 47 ammo. This gun a beast if it is used properly. People usually prefer DP with 4x scope because when DP and 4x is used it becomes difficult for enemy to survive. The reload time of this gun is what players hates the most. This gun is usually used for mid and long range.

UZI the gun which has the most firing rate. This gun is usually used in the close range. The damage of this gun is slightly low but due to its firing rate it can even take down AKM AND M762 if used properly. This gun can be used in mid-range also but compare to other it is a bit off in mid and long range.

M16A4 is a gun which people usually prefer in long and mid-range. The single tap of this gun with the help of 4x scope is beast.

The above guns is the favorite of many people so don’t take it seriously if your favorite gun is not in number 1 or in the list.