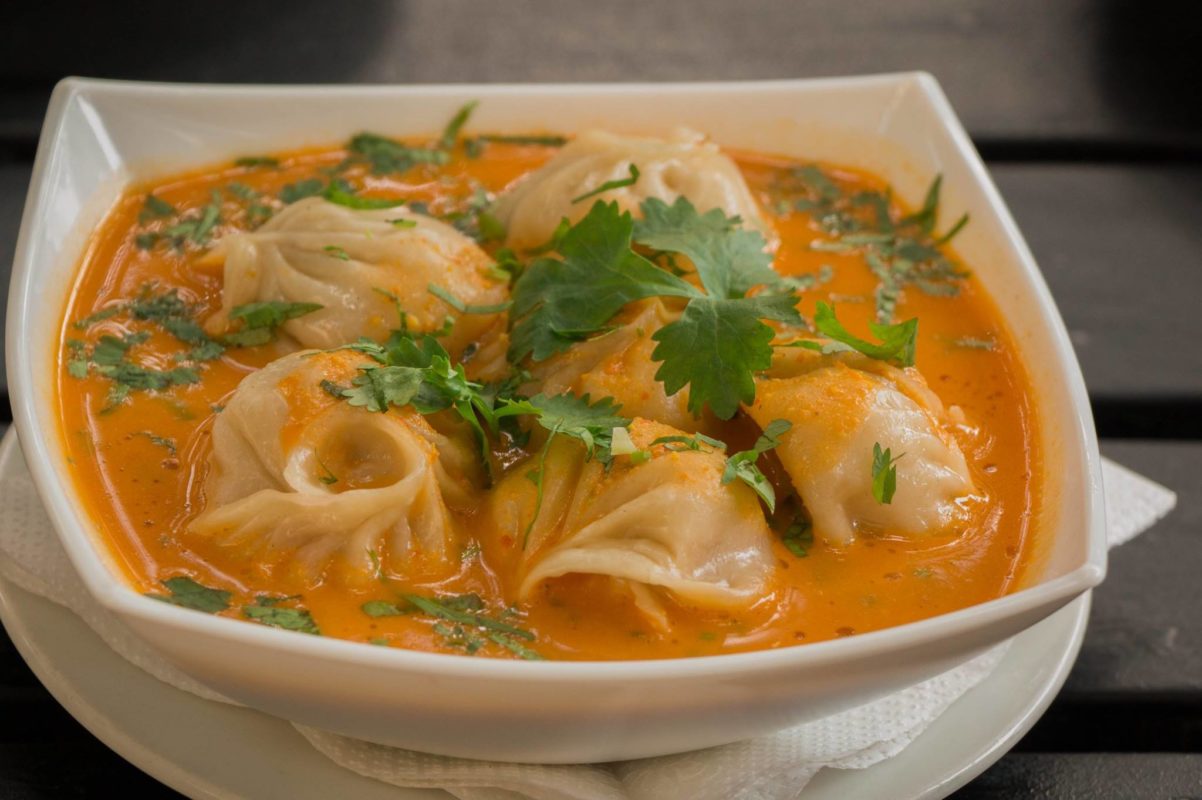 TOP 11 DISHES TO TASTE IN NEPAL Yomari is a dish from the Newar community in Nepal. It is a steamed dumpling with an outer layer of rice flour and the inner material chaku. The dish plays a very important role in the Newari society in their festival Yamari Pune. Sel-Roti is a traditional circular-shaped domestic rice bread made up of rice flour. It is prepared mainly during widely celebrated Hindu festival Dashain, Tihar and wedding parties in Nepal. Sel-Roti is the most essential dish in festivals and special occasions for the Hindu in Nepal. Sukuti is the main dish of traditional dried meat from Nepal. It is prepared by slicing the meat into thin slices and carefully removing the fat. The straps are then coated with spices such as salt, cumin, black pepper, and chili. The meatballs are then dried in the sun or hung above the fire. After a few days, the meat is ready to eat and is usually prepared by heating in a pan and adding other spices such as tomatoes, onions, and garlic to make a delicious snack.

Yogurt Juju Dhau is a popular milk product in Nepal found mostly in the town Bhaktapur. Juju Dhau is made by the Newari peoples in the clay pots and plastics cups. Lassi is the yogurt-based refreshing drink usually slurped in the summer days. You may heard and tasted yogurt with fruits Lassi but the taste of Nepali traditional street Lassi with an extra blend of milk, fresh mint leaves, ground cumin, ground cardamom, sugar, sprinkle salt, and ice can take you to unexpected approach. Slurp the taste of Lassi in the Basantapur street costs around $0.8. I will bet if you didn’t order the next one. Alcoholic drink of millet, Tongba is a traditional and tribal drink originated by the Limbu people in Nepal. Tongba contains 5-10% of alcohol. It is culturally and religiously important for the inhabitants of Limbu in Nepal. Their festivals and special occasions will be incomplete without Tongba. Offering Tongba to their guests is a symbol of respect in their culture. Taplejung is the ultimate best destination for Tonga drinking but you can find it on Kathmandu as well.

A fine bamboo straw with a blind end is embedded in the container of millet grains and hot water to act as a filter of perforated on the side. After the millet grains in a container becomes dry, hot water is added and the process repeats until the alcohol is exhausted. Sekuwa is the most popular traditional Nepalese style of meat, cooked in a natural wood fire usually made by pork, lamb, goat or chicken. While the meat is raw, it mixes with natural herbs, spices, and other ingredients. Sekuwa is popular mostly in Dharan and Kathmandu. Dharan and Tarahara, located in the Sunsari district in eastern Nepal are known as the capital of Sekuwa in Nepal. Daal-Bhat, the national dish of Nepal is a traditional and almost regular meal. Daal is cooked with onions, garlic, ginger, chili peppers, tomatoes, tamarind. It also contains herbs and spices such as coriander, garam masala, cumin, and others integrates. Recipes may vary by season, location, ethnicity, and family. Daal-Bhat is served with mix seasonal vegetables, saag, yogurt, gundruk pickles, tomato pickles, and meats as optional. Dindo is a traditional dish originated from Nepal. It is prepared by boiling water in a pan and mixing it with flour, stirring constantly. Dindo can be made up of buckwheat, millet, wheat or cornflour. A narrow iron spatula is used to mix a thick mixture to facilitate mixing. Dhindo with local chicken is eaten by making a ball with fingers and immersing it in a local chicken soup. It shouldn't be chewed because Dhindo is hot and can stick between the teeth.