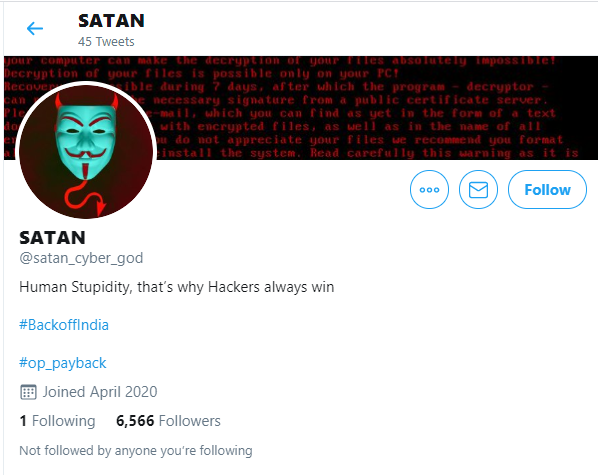 While the entire media and the citizens are fully focused on the Covid-19 lockdown and the land disputes going on between Nepal and India a newly created twitter account @satan_cyber_god  on the 8th of April has been a matter of concern recently.

The twitter account made claims on hacking sensitive customer data from Prabhu Money Transfer tweeting,
“@Prabhu Money Transfer did! Just removed there post! which contained the information of innocent citizens and you lovely costumer!
But after all they are innocent people who ain't got no idea what's happening! Thus, we are there for them now
~we are the voice of those who can't”

As, the internet is filled with baseless claims, Satan also provided some evidence to verify his claim. He released the email addresses of Prabhu users through pastebin.com, a website in which large volumes of datas can be shared anonymously, as his evidence.

Following this, Satan found a security flaw on Daraz, a popular e-commerce site which was quickly fixed and a note of appreciation was provided from Daraz’s security team to Satan for pointing out at the flaw.

On 10th April, warnings were issued to the Nepali Congress on their system Vulnerabilities, and threatened to hack the system if they did not fix it, tweeting
“@Nepali_Congress Please secure your data including all the donations and other information,don't weaken your citizens. Don't make us do it again”

Similarly, on the 11th of April, Satan tweeted “Greetings, everyone @tu_information Tribhuvan university and @CTEVTNepal
CTEVT you shouldn't make the information regarding your employees and teachers free for everyone! ~just a remainder
:( i don't want to harm any property of nepal and not doing it”

Warning the Tribhuvan University and CTEVT Nepal to secure their information and released the personal information of the lecturers and professors of TU on the same site, pastebin.com as evidence.

On the same day another he tweeted, “i have the cell phone numbers of most of the people out there! Including citizenship's id number of our respected prime minister! Hope to get come up with something”

Another two tweets on 21st April
“Guess who's back! Jalpaiguri Government Engineering College Database DUMPED
#backoffindianmedia
DB:https://ybin.me/p/5ab880e0ae0f1df0#x4QlKjsfX1kU46Pom+z3xE3N5p9UQFWa1UDPqzS7zlM=…
Mirror DB: https://justpaste.it/jgec Mirror DB: https://pastefs.com/pid/210818
PS: This is just a demo! Just to notify i am back!”
And
“Hello @ABPNews you good?”
And also released the jwplayer's license key on a tweet that said,
”Greetings,Indian dhotis @ABPNews@abpnewshindi
Now you are not the only one who knows your @jwplayer's license key, let everyone know it,
JW_LICENSE_KEY:"R6R+UfIxz57PgSjqAmhN/3m1wSmINecSkOuyMw=="
#backoffindianmedia #BackOffIndia all thanks to
@ALIVELordBrahma”

Also, a tweet on May 22 saying,
“Yes, you lost something precious again @ABPNews
Farbirc's API key, guess you know what's that
io.fabric.ApiKey: "52b55d8e452ffeedec5cba3198d29e3422d40148"
Now let's make things worse for you
#backoffindianmedia #backofindia
all thanks to again @ALIVELordBrahma”

Followed by this, a recent tweet saying
“Knock knock let the devil in

Undoubtedly, it would be a waste of information and efforts to track down Greyhat hackers, Instead, we should focus on securing all the IT systems.

Thus, It would be a waste of resources and efforts to track down greyhat hackers. Instead, we should be focused on securing all our IT systems and Thank SATAN.