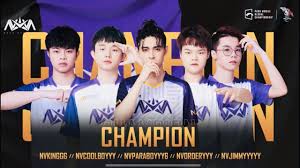 Nova XQF the legendary team with legendary players, Paraboy, Jimmy, Order, King on the title of world champion by winning PMGC season 0. The winning team will take home with them a prize $700,000. With a total of 4 chicken dinners and 151 kills, Nova XQF had 319 points. No other team had even reached  the 300 points mark.

“NOVA ESPORTS is your PUBG MOBILE GLOBAL CHAMPIONSHIP 2020 Finals Season Zero Champions!”
The PMGC was extended for 2 days owing to network issues that were faced by the organisers, never the less, the games continued from Day 2 and the final day concluded on January 26, 2020. The Final match on PMGC was won by PW888 with a 15 kills chicken dinner. After all the days ended, the fan favourites team 4AM (4 Angry Men) who were not the winner, but 4 AM Suk won the title of the MVP the most valuable player and won the prize of $15000.

Suk had total damage of 11510, with a total of 64 kills and a total contribution of 27.6 per cent for his side. In the overall rankings, 4 AM stood at second place with 5 chicken dinners and 294 total points, and it was a remarkable performance by 4AM. The Chinese team showed that why they are the gods of Pubg. The first and second position both were occupied by Chinese team they have dominated the whole PMGC.