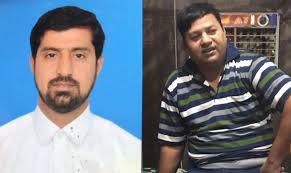 Three member's from the Pakistani High Commission have been arrested red handed in a joint operation of the Military Intelligence and Delhi Police's Special cell. They were trying to exchange the stolen classified documents.

Javed Hussain, Abid Hussain and Tahir Khan, these 3 men's are found to be directly in link with the ISI. They were caught with Rs 15,000, two iPhones and some incriminating documents. They falsely claimed to be under diplomatic immunity when interrogated. They also claimed that they were in touch with numerous people that provided them sensitive information about military deployments. The agencies and trying to track the informants and inquiring if other staffs were also involved in the racket.

A report has been sent to the MEA and the men's were sent for medical examination and handed over to the high commission after registering an FIR.

It has also been found that Abid Hussain and Tahir khan were using fake names and id cards. They travelled the city in a car driven by Javed Hussain.

The men's, Abid Hussain who was working as a visa assistant since 2018,  Tahir Khan as an upper division clerk from around 2018 and Javed Hussain as a driver for  more than 5 years are found to be linked directly to the ISI. They were asked to leave the country within 24 hours by the Foreign Minister after being declared persona non grata.

India has registered a strong protest against Pakistan for threatening India's national security. However, Pakistan has rejected the charge  and called it false and unsubstantiated. The foreign ministry in Islamabad has alleged that their personnel's were tortured and also accused India of trying the restriction for Pakistani Diplomats.

They stayed under a scanner for quite some time and then attempted to contact and take some defence personnel for spying activities.