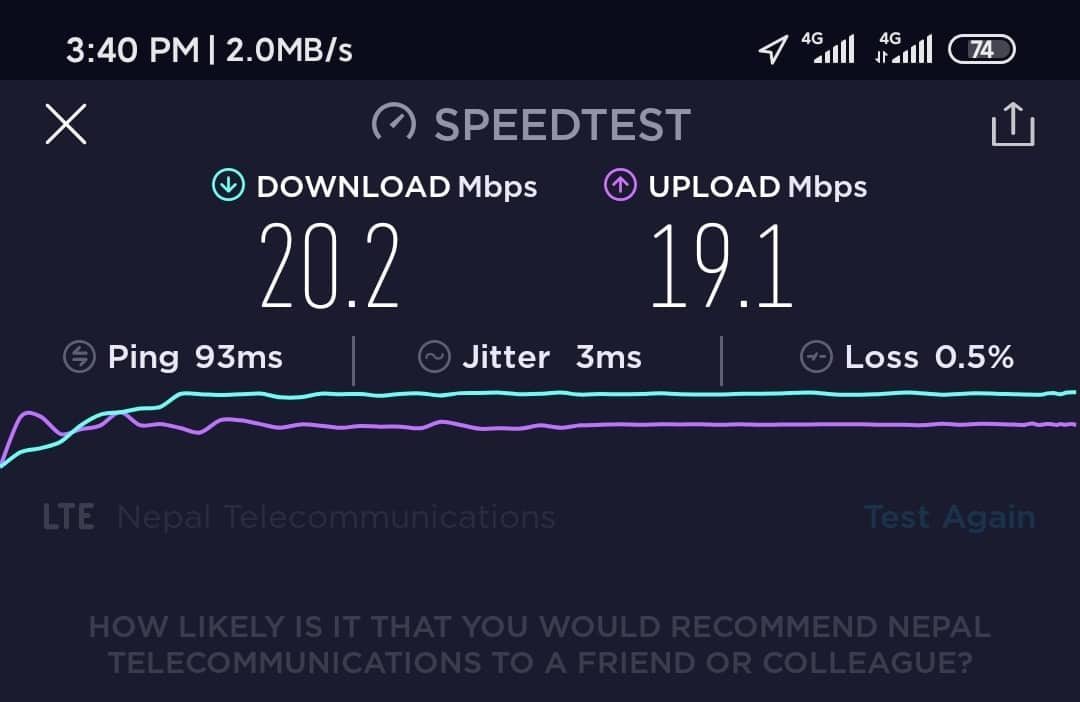 The internet connection speed analyzing US based Company Ookla has recently published the internet speed for the month of April, 2020. Nepal dropped 8 places this time to 118th on Global Speedtest Index by Ookla for fixed broadband speeds in April. However, Nepal’s  positioning has improved for the mobile broadband speed as the internet speed has increased to 14.25 Mbps  this time which was constrained to 10.32 Mbps in the past positioning.

As, Ookla has a large testing infrastructure with in excess of 7,000 servers in over 190 nations worldwide, the data for the index comes from the billions of tests taken by actual internet clients throughout the world using Speedtest application every month.

The fixed broadband speed in Nepal has seen a decrease as compared  to the past which could possibly be the aftereffect of the COVID-19 pandemic lockdown. Nepal has ranked in the position 118 with an average fixed broadband speed of 17.97 Mbps in the month of April. With the rapid expansion of 4G networks from NTC and Ncell, Nepal’s mobile broadband speeds has estraordinarily improved. The country’s ranking for mobile broadband has witnessed an increasing pattern as a result of the expansion of reliable 4G network throughout the  nation.

Nepali customers are provided with broadband internet connection by companies like Worldlink, Vianet, Nepal Telecom, Subisu etc.With a broad system of fiber-optic lines, Worldlink is currently the biggest fixed-line broadband supplier in Nepal. Though, ADSL service in Nepal has a maximum speed of 5 Mbps which is below the average internet speed of Nepal, there are in excess of 1 lakh users that still use ADSL for internet at home.

The extensive use of the internet and speed test during the pandemic Lockdown period can be taken as the significant reason for the reduction in speed of the fixed broadband.

In Nepal, the internet consumption has expanded by nearly 40 percent. This could possibly be the result of the entire population restricted in their home, and the increase in network traffic means increase in deliberate connections. Fixed broadband speed in Nepal saw a decrease by 15 percent while the global fixed internet witnessed a change by almost 0.25 percent.