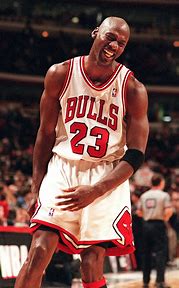 A man with the golden hands Michael Jordan is an American former professional basketball player. He played 15 season in NBA and won 6 of them for his team Chicago Bulls. He was famous for his air slam dunks and air dunks so people gave him a nickname of AIR JORDAN which is a shoe brand now.