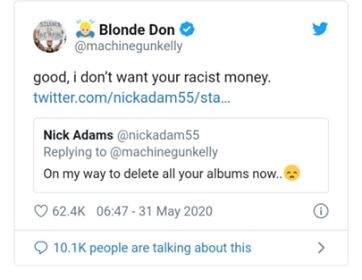 MGK, Machine Gun Kelly has been criticized for being a part of the protests to which he has responded.

MGK is also one of the entertainers that has actively taken part in the street protests after the killing of George Floyd, an African American man killed by a white police officer, after he lays down the ground during arrest. during an arrest.

Kanye West, Hasley and John Cusack are some of the entertainer's that have been spotted in the protests.

And recently, he has bid farewell to a critic fan, that criticized him for his participation in the protests of Black Lives matter.

On Saturday, the 30th of may, he said on a tweet that he was on his way to the protest and hoped to see his fans there. Replying to his tweet, a fan said that he was on the way to delete all MGK's album now, of which MG replied that it's good and MGK didn't wanted his racist money.

A joint cover of the Rage against the Machine's ' Killing in the Name ' was shared by Machine Gun Kelly and Travis Banker earlier this week in support of the Black Lives Matter movement.

Black and White footage of the musician's protest on the streets of LA can be seen in the cover video along with the clips of song tracking in the studio. MGK can be seen holding a sign in one of the scene that says, stop arresting protesters and arrest the killer cops