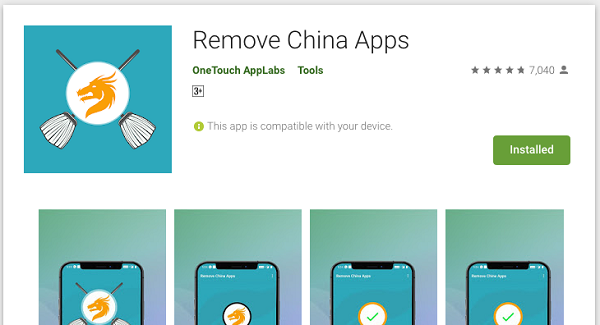 Developed by OneTouch AppLabs, a self proclaimed Indian startup, the app Remove China Apps had crossed at over 1 million downloads within 10 days after it was launched in May. The overnight success of this app came in between the time of tensions rising between China and India over the country's disputed border in the Himalayas.

Through the analytics, it has been that most of the installs were found in India. However this app had also been successfully gaining momentum in Australia in the last few days as it rose to No. 5 among Android tool apps.

This app is the simplest to use. Enter the app, Click Scan, then it will either congratulate you for having no chinese apps on your phone or display you a list of the apps that are determined to be of the Chinese Origin, TikTok for instance.

The Remove China Apps has a near perfect ratings of 4.9 out of 5 stars from at around 1,80,000  reviews. This app claims that it can identify the origin of the app's country based on the market research. However, this app does not guarantees the accuracy of the results and also leaves the choice of removing the other apps flagged by this app, with an additional saying that it provides services for non commercial purposes.

This app has prompted a heated debate in between the Chinese developer's that are targeting the International Markets. China App Exporter's have claimed that Remove China App is nothing but just a form of market disruption and also asked the Chinese Developer's for reporting the app.